Ou, the center of ancient Izumo—The History and Culture of Yakumotatsu Fudoki-no-oka— 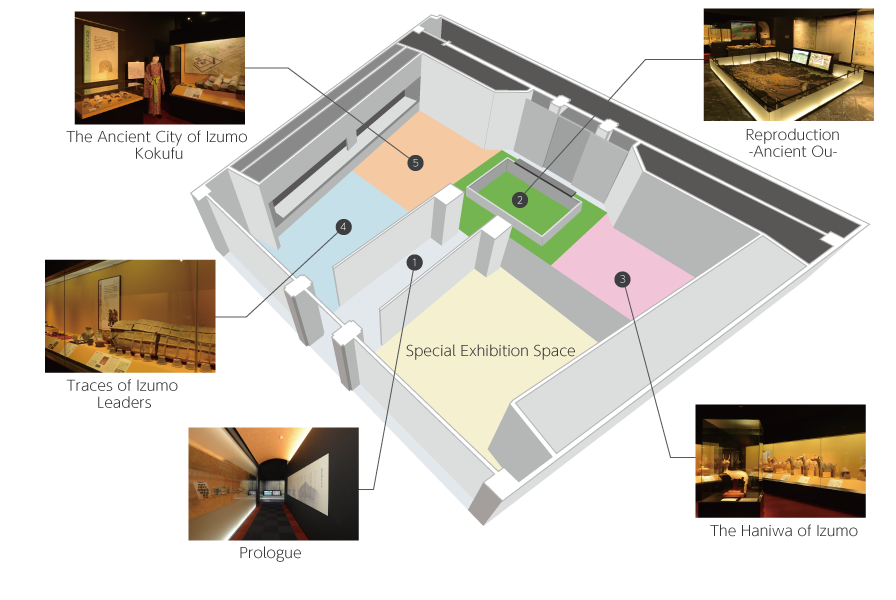 1. Prologue—the origins of Ou
From the Paleolithic era (about 20,000 years ago) through the Jomon period, the area known as Ou which would become the center of ancient Izumo was inhabited by hunter-gatherers and fishermen. By the start of the Yayoi period, rice cultivation was taking place and the number of settlements increased, establishing the region as the area’s center.
2. Reproduction—Ancient Ou (a reconstruction of the Nara period)
This 1:1000 scale model depicts the Nara-period landscape of an area measuring 4.8 km (east to west) by 3.5 km (north to south). The historical reconstruction includes the excavated government headquarters, storehouses, temples, and the national temple; as well as local administrative buildings, post stations, military troops, markets, ferry crossings, and the San’indo described in Izumo-no-kuni Fudoki* ; and the kofun which existed since before that time. It is a must-see diorama that reproduces the ancient provincial city with a realism that is only possible in Izumo. * Records of the culture and geography of the ancient Izumo
3. The Haniwa of Izumo
According to the legend in the Nihon-shoki, Izumo was involved in the origin of haniwa. This exhibit explores that connection. Among the items on display are the very well-known Excavated Deer Clay Sculpture in Looking Back Posture (a designated Important Cultural Property) discovered at the haniwa kiln ruins of Hiradokoro Site, and a set of haniwa figurines excavated from one of Japan’s oldest tumuli, the Ishiya Kofun, which dates back to around the middle of the fifth century AD.
4. Traces of Izumo Leaders Revealed by the Kofun
The existing kofun provide valuable clues as to how members of this region’s powerful families became the rulers of Izumo. In particular, the sword bearing the inscription Nukatabe-no-Omi (a designated Important Cultural Property) which was excavated from the Okadayama No.1 Kofun is an important historical record of the existence of a leader (Omi) with connections to Yamato in the late sixth century.
5. The Ancient City of Izumo Kokufu
This exhibit displays artifacts discovered at the Izumo Kokufu Site which demonstrate the function and features of that area. Surveys of the site are ongoing and the latest discoveries will be presented here as they are obtained. Aspects of the Nara and Heian periods are also explored through artifacts excavated from the Kokubunji (national temple), the private temples of powerful families, and village communities.
6. Scenery and Cultural Assets of Fudoki-no-oka (Annex)
This exhibit displays materials about the changes in the Kokufu area throughout the medieval and early-modern eras as well as topics such as the transition to irrigated rice paddies, grave sites of the past and present, and the shrines and temples of the Fudoki-no-oka region. Also presented is information related to the history of studying the Izumo Kokucho Site, which culminated in its excavation. The floor of the exhibition hall depicts an aerial photograph of the entire Fudoki-no-oka area. 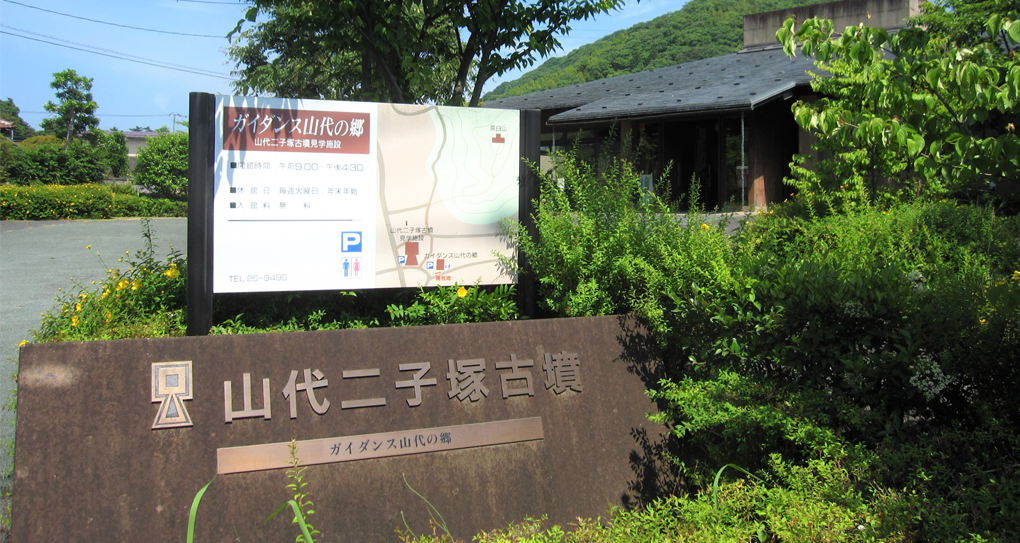 1. Whispers of the Kofun Mini-Theater
In this mini-theater, have fun answering quizzes while learning about the Yamashiro Futagozuka Kofun adjacent to the Guidance Yamashiro no Sato (13 minutes). With a total length of 94 meters, Yamashiro Futagozuka Kofun is Shimane’s largest tumulus and is also famous for being the first of Japan’s so-called “conjoined-rectangle tumuli.
2. Sarcophagus-Style Stone Chamber (full-size replica) at Mukoyama Mound No.1
These unique tunnel-shaped chambers made of hewed stone were constructed in eastern Izumo from the end of the sixth century through the early seventh century. This full-size reproduction of the prototypical stone chamber found at the Mukoyama Mound No.1 (in what is now Koshibara, Matsue City) allows visitors to examine the interior construction of the chamber.
3. The Kofun of Oba and Yamashiro —Relief Map
This is a laminated, three-dimensional map of northern Yakumotatsu Fudoki-no-oka (the Oba and Yamashiro regions). Once a valley, the area is home to a group of four large kofun which are representative of Izumo; in the Nara period, two temples were also erected here. Observe the relationship between the terrain and these historical landmarks as indicated on the map.
4. Soil Observation Center (Yamashiro Futagozuka Kofun)
Although the rear portion of Yamashiro Futagozuka Kofun was destroyed to build a firing range for the Imperial Japanese Army around the year 1907, it was later restored and established as an observation center by the prefecture of Shimane. It allows visitors to directly view the layers of soil comprising a cross-section of the kofun.